Your voice can change services

What is effective engagement?

Recent decisions by Croydon CCG, to close Foxley Lane women’s mental health unit and to cease assisted conception (IVF) services despite public engagement resulting in substantial opposition to these cuts, raise two important questions for me. Firstly, what power should patient have to influence decisions on healthcare and secondly what is effective engagement and how does it differ from consultation?

The NHS Constitution states that a citizen we have the right to be involved, directly or through representatives, in the planning of healthcare services, the development and consideration of proposals for changes in the way those services are provided, and in decisions to be made affecting the operation of those services.

Section 242 of the consolidated NHS Act 2006 and 2012 Health & Social Care Act places a duty on NHS trusts, CCGs & strategic health authorities to make arrangements to involve patients and the public in service planning and operation, and in the development of proposals for changes.

While the legislation defines that patients and public need to be engaged it does not define effective models of how this should be delivered. So, what is a good example of engagement?

David Gilbert of InHealth Associates, a specialist consultancy that helps NHS organisations deliver better patient and public engagement suggests proposes an engagement cycle. At each stage, patients and the public have a role to play in services. 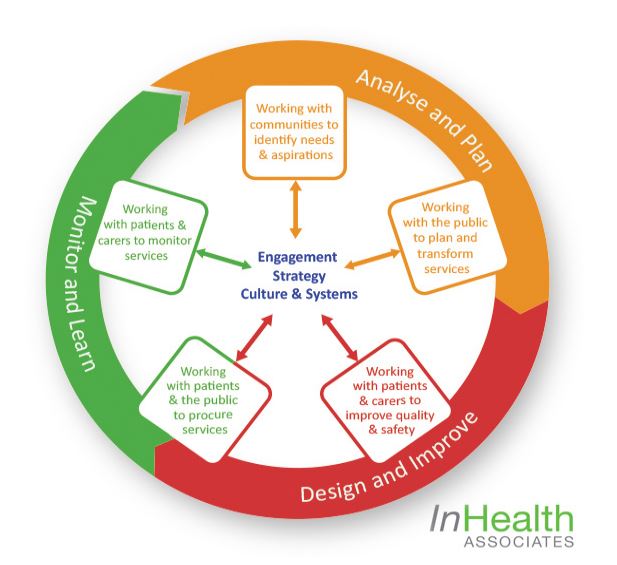 What is interesting about this cycle is that is looks at getting public, patients and communities involved right at the beginning.

It focuses on five stages:

This engagement cycle isn’t very new, it has been adapted and tested by dozens of CCGs and NHS organisations across the country. Utilising this model is more likely to result in the public feeling valued, trusted and in a position of influence, the commissioner understanding that they have reliable data, and the backing of the public in their decision-making. And with the right commitment, it could happen here in Croydon.

Which takes us back to the Foxley Lane and assisted conception decisions. Had the CCG sought public engagement right at the beginning of the process, instead of consultation towards the end, the public may have gained a greater understanding of the complexities and this might have helped the CCG in terms of trust. The same decision may have been made,  but at least the public would have been engaged in the process and had some ownership of it.

That is not to say that this kind of public involvement does not happen in Croydon. A Healthwatch Croydon volunteer was recently part of the procurement panel for the new urgent care services contract. The insights he gained as well as the input he gave shows what can be possible. What’s more he feels, that he contributed to this shared decision. An example of the CGG doing with its service users not too its service users.

Another positive example of this,  is the commitment given by Croydon Council’s public health team to work with HWC in involving teenagers in the service design of sexual health services in the borough. based on the recommendations of our research report. We need to see more of this kind of public engagement but earlier in the decision-making, and it is not just the CCG, but at the two NHS Trusts and with the Council. Public engagement is not rocket science.

This discussion is even more important when you consider that there are due to be major changes to health and social care in Croydon as a result of the South West London Sustainability and Transformation Plan. Now more than ever is the time to consider real engagement, particularly when the changes to services are substantial and predicated on hard financial decisions to be made. So, when are the commissioners are going to take up the challenge of the engagement cycle and engage with the public as true partners?

The benefits could be transformational for all concerned.