Your voice can change services 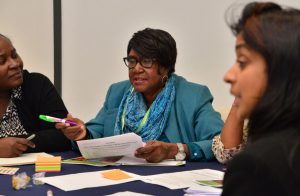 The concerns and needs of carers is usually an area long overlooked by policy-makers and NHS providers. While the focus is on those being cared for, carers sometimes get missed out in the system, as some of our reports on hospital discharge in 2016 suggested.

Did you know that according to Croydon Carers Information Centre, there are 33,000 carers in our borough? Yet it has one of the lowest carer Health Check take up rates of all London Boroughs with just over 1 in 20, 5.4% of the eligible population being offered a Health Check. The Croydon Carers Strategy 2011-2016, noted that while carers often neglect their own health and wellbeing, Black Minority Ethnic (BME) carers in particular faced additional difficulties of stereotyping and social inclusion.

The 2011 report Half a Million Voices noted that BME carers provide more care proportionally that White British carers, which puts them at greater risk of ill health, loss of paid employment and social exclusion. These are, of course the same issues as White carers, the difference is that they also have to deal with cultural barriers, stereotyping, language difficulties, which further enhances the exclusion. Some BME groups also suffer more exclusion that others with Bangladeshi and Pakistani carers particularly challenged.

At the local level, the London Borough of Croydon’s Carer Engagement 2017 report, which surveyed carers in the borough, had responses from 59% white carers and 24% BME, yet the population in Croydon is 54% BME, 46% white. The report proposed that future engagements should therefore seek responses from BME community to ensure better representation.

IRISS Insights, who specialise in enhancing the capacity and capability of the social services workforce, suggested in their report, Improving Support for BME Carers that there is little guidance concerning the needs of BME carers. Part of the issue is the difficulty in obtaining accurate information about the size and nature of the BME carer population. Census questions identifying BME carers have existed since 2001. This has made a difference, but underreporting is high, due to language barriers, concerns on immigration status, or a perceived suspicion of sharing data with the State.

Ethnicity data has improved significantly since the 2010 Ethnicity Act made a legal requirement for health and social care providers to collect data. This UK-wide data has revealed that Indian, Pakistani and Bangladeshi groups report a poorer experience than White British people. But it is not clear where in the system they are experiencing unfair or inequitable treatment.

Where research has taken place, the key issues were language barriers and knowledge of services and cultural challenges. For example, in Bengali, Gujarati, Urdu and Punjabi there is no word that translates to ‘carer’, so the role may not be recognised or perceived as a role that needs support. There are also concerns that NHS services could not meet cultural and religious needs, so services were not taken up.

While Healthwatch Croydon is here to represent the views and experiences of all Croydon residents, we do also have a duty, in law, to gain the views of those least represented. BME carers clearly fall into this category, particularly where we have a population that is 54% BME.

This area of work is clearly under-researched and has many contradictions. Therefore, the focus of the first of our in-depth research reports in 2017-18 will focus on asking BME carers about their experience of using Croydon’s GP services, to see if their needs are being met.

It is important that anyone irrespective of background gets the neccessary support they need. In a borough with such a rich diversity of people, services need to be able to respond to all service users wherever they come from. The aim of this report, will show any barriers to access and therefore guide NHS buyers in delivering services that give BME carers the support they need, but we cannot do it without the views of BME carers.

If you are a BME carer, come and share your experience at by filling in our survey by 21 July or contact our Community Engagement Manager, Geraldine Bolam on 020 8663 5632 or geraldinebolam@healthwatchcroydon.co.uk for a one-to-one chat. We can only influence change with your experiences.